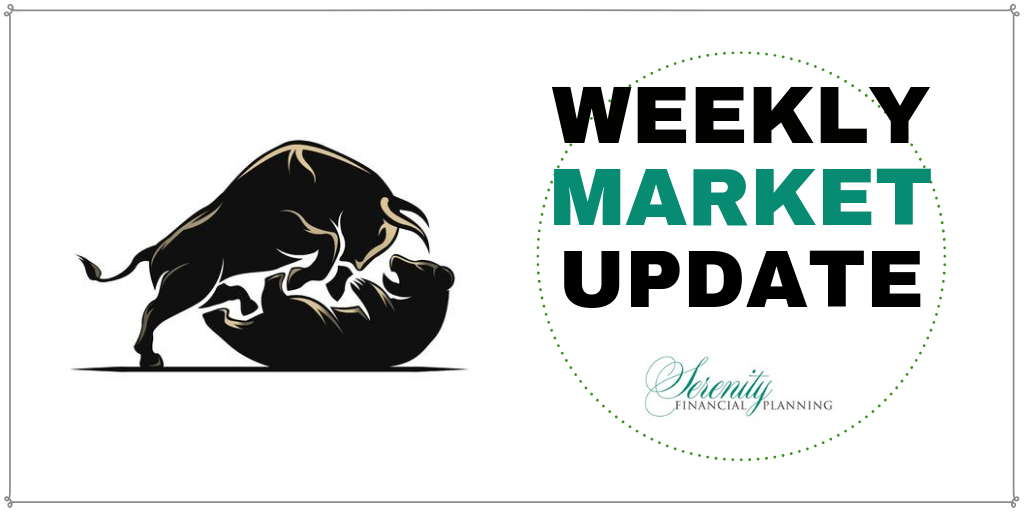 Geopolitical matters have complicated the tug-of-war between fiscal2 and monetary3 policies and contributed to investor concerns about increased policy uncertainty. Policy uncertainty will likely persist, but we think financial markets will climb this wall of worry.

Investors are facing a host of unresolved international and domestic issues, in addition to an upcoming U.S. presidential election, all of which are contributing to an overall sense of uncertainty. Luckily, financial markets have been adept at powering through “walls of worry” in this bull market, which is now in its 10th year.

We expect monetary policy to remain accommodative (easier to borrow money) worldwide as the global economy recovers from trade disruption, and we see this central bank intervention as a welcome support for risk assets. We’ll continue to emphasize diversified portfolio strategies, and we view stock-market selloffs as opportunities for suitable investors to consider rebalancing portfolios and adding to positions. 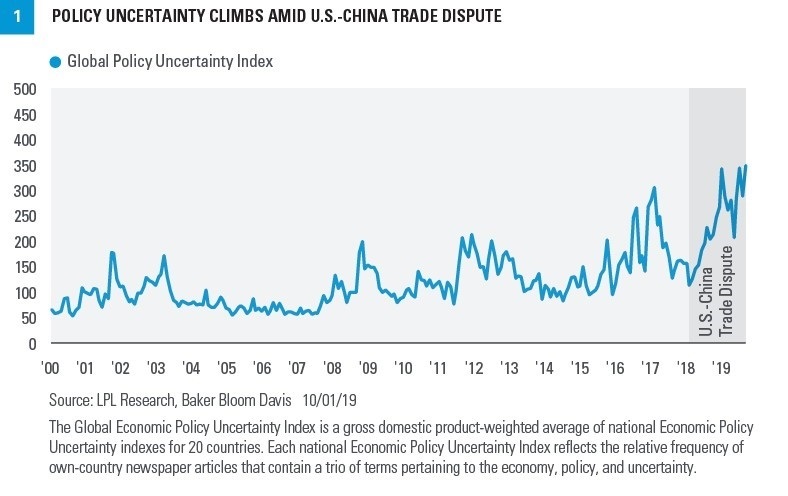 Policy has played an increasingly important role in investors’ outlooks. Over the past several years, a combination of monetary and fiscal initiatives have supported growth in economic output and corporate profits. The tailwinds of taxes, deregulation, and additional government spending programs have been offset by the headwinds of global trade uncertainty. This has led to weakness in manufacturing activity around the world, which has required additional responses from global central banks, a majority of which have already lowered interest rates.

We also have seen throughout this record-long economic expansion that financial markets have risen to the challenges presented by policy. For instance, after global uncertainty peaked earlier in this economic cycle in the wake of the European debt crisis, 2016 Brexit vote, and 2016 U.S. presidential election, the S&P 500 Index climbed an average of 16% in the following 12 months. (Brexit is the upcoming exit of the United Kingdom from the European Union.)

Geopolitical matters have complicated the tug-of-war between fiscal and monetary policies. The impeachment inquiry in the United States, a rapidly approaching Brexit deadline, the new consumption tax in Japan, escalating tensions with North Korea and Iran, and the ongoing trade talks between the United States and China have all contributed to investor concerns about heightened policy uncertainty [Figure 1].

Companies have stepped back from expansion plans, lowering demand for goods and cutting manufacturing output. Finding a bottom point, or floor, in manufacturing is critical because of the sector’s importance to corporate profits; corporate profits serve as a leading indicator for employment and investment. Clarity on trade is also important for renewed business investment, which helps to boost productivity. The markets are signaling displeasure with each manufacturing report, suggesting to trade negotiators the necessity of striking a deal sooner rather than later.
Trade uncertainty has weighed on the global economy, and cracks are forming in the United States’ economy as well. The biggest impact has been in the manufacturing sector, which has notably weakened after reaching a cycle high in September 2018. According to recent data from the Institute for Supply Management, U.S. manufacturing activity reached a 10-year low in September 2019, in step with global manufacturing’s steep decline over the last several months.

A meeting this week between high-level U.S. and China officials in Washington may serve as a precursor for some thawing of relations at the important Asia-Pacific Economic Cooperation (APEC) Summit  in November, where we hope President Trump and China’s President Xi will announce progress. Ultimately, we expect an interim deal sometime in the first quarter of 2020. The U.S. impeachment inquiry, though, will likely prevent any progress on the USMCA trade agreement (known as NAFTA 2.0), leading to prolonged uncertainty for trade with Mexico and Canada. There is also a chance the United States could implement auto tariffs on the European Union, adding to the uncertainty.

The global recovery has hinged on unprecedented monetary policy programs, and global central banks have recently switched back into easing mode to combat trade-related economic weakness. Last month, the European Central Bank announced a new round of bond buying. In the United States, the Federal Reserve (Fed) has cut rates by 25 basis points (0.25%) twice this year, and we think at least one more cut will likely happen before the end of 2019. Another cut would take the Fed funds rate down to 1.5–1.75%. (The Fed funds rate is the interest rate banks charge to loan money to other banks.)

Given the U.S. economy’s resilience and the already low policy rate, we do not expect the Fed to take rates much lower than 1.5%. Indeed, policymakers want to ensure enough wiggle room to adjust rates down the road when a recession may appear more likely. In that scenario, a Fed funds rate of 1% could be the new zero and would be accompanied by other recession-fighting initiatives, including renewed quantitative easing programs, or buying bonds and other assets from banks to provide banks more cash. The Fed has committed to acting “as appropriate” to sustain the expansion, and we have faith policymakers will do what is needed.

Monetary policy is a coordinated effort between the U.S. Federal Reserve and global central banks right now, but there are complicated dynamics to consider. There is a mismatch between the Fed and other central banks’ approaches, which could increase the value of the U.S. dollar too much and widen the interest-rate differential between U.S. Treasuries and other sovereign debt. The Fed is also dealing with liquidity issues in the short-term repurchasing (repo) market, and policymakers likely will have to come up with a longer-term solution there.

The opinions voiced in this material are for general information only and are not intended to provide specific advice or recommendations for any individual. To determine which investment(s) may be appropriate for you, consult your financial advisor prior to investing. All performance referenced is historical and is no guarantee of future results.

The economic forecasts set forth in this material may not develop as predicted.

Investing involves risks including possible loss of principal. No investment strategy or risk management technique can guarantee return or eliminate risk in all market environments.

All indexes are unmanaged and cannot be invested into directly. Unmanaged index returns do not reflect fees, expenses, or sales charges. Index performance is not indicative of the performance of any investment.

All information is believed to be from reliable sources; however LPL Financial makes no representation as to its completeness or accuracy.

This research material has been prepared by LPL Financial LLC.

FINRA/SIPC). Insurance products are offered through LPL or its licensed affiliates. To the extent you are receiving investment advice from a separately registered independent investment advisor, please note that LPL is not an affiliate of and makes no representation with respect to such entity.